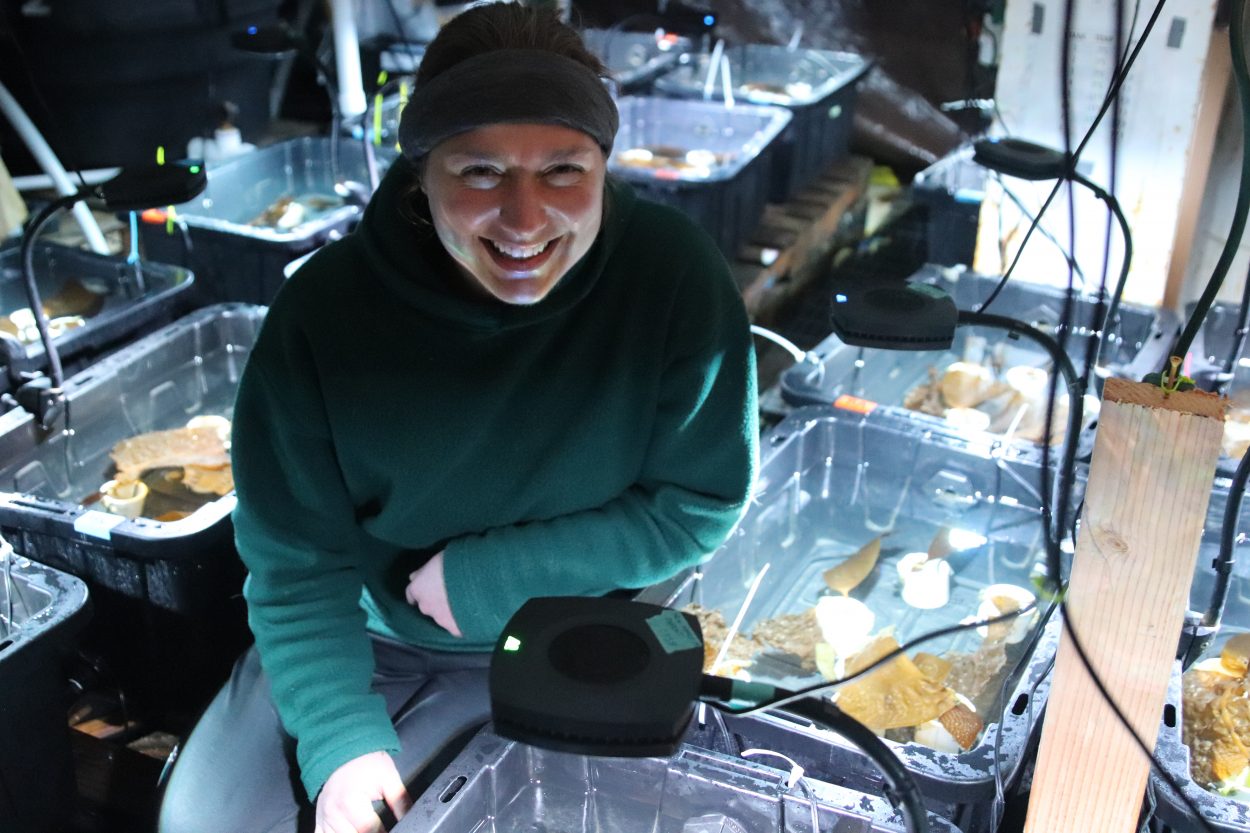 Lauren Bell (photographed in March 2020) kneels over one of her many seaweed plants growing in the basement of the Sitka Sound Science Center. Bell spent the last two winters in the center’s basement, studying how warmer, more acidic waters may affect marine organisms in Sitka Sound in the future (KCAW/Rose)

Predicting the future is hard, unless you’ve got a crystal ball. In the basement of the Sitka Sound Science Center, a researcher has designed an experiment to study the future of ocean acidification, and her “crystal ball” is herring.

In Part 2 of KCAW’s two-part story on the 2020 herring season in Sitka Sound, Katherine Rose visits the lab of doctoral researcher Lauren Bell, as she explores possible futures for our oceans, and one of its most important resources.

Lauren Bell stands in about an inch of water, hovering over one of over twenty tanks in the basement of the Sitka Sound Science Center. The equipment used in this experiment is loud, and artificial sunlight bounces off Bell’s face as she tells me about the different types of seaweed she’s growing.

“The seaweed have grown a lot, they’ve been sitting in these conditions for about a month now,” she says.

Bell is a PhD student at UC Santa Cruz, and for the last couple of years she’s been doing her research in the center’s basement. She’s been trying to replicate what Southeast Alaska’s waters will look like when our grandchildren are getting up there in age.

“The projected change in Sitka Sound due to climate change, these added carbon emissions that are coming into our atmosphere, is that we’re going to see a gradual warming of our waters throughout the year,” she says. “At any time of the year they expect that within 80 years we’re going to see about a a 7 degree increase Fahrenheit in water temperature.”

The excess carbon means nearby waters will become more acidic- the phenomenon known as “ocean acidification.”

Bell uses hot tub heaters to simulate future temperatures and then bubbles in carbon dioxide, creating acidified water. Then researchers can put any marine organism from Sitka Sound into those conditions and see how they respond. This spring, they looked at two different kinds of seaweed.

“We’re seeing how that impacts their growth, their productivity, how they photosynthesize in different light, their chemical defenses,” Bell says.

Seaweed may or may not do better under some of these conditions.  She doesn’t have results for this experiment yet- that takes a little while.

But last year, I visited her in the same basement, where she was monitoring herring roe to see how climate change could affect Pacific herring, and she now has the preliminary results from that study.  Bell compared herring eggs from fertilization to hatch in four different conditions. She looked at how they were affected by warmer temperature, more acidic conditions, and water that was both warmer and more acidic. Bell found significant differences between herring eggs grown  under those future conditions, and those grown in today’s conditions.

“It seemed like warming and acidification had very different impacts on actually what they looked like, how big they were and how well they could use their yolks,” Bell says. “And they had opposite effects.”

Bell says the fish that were exposed to only higher temperatures were shorter with larger yolks. And when you looked at ocean acidification they were actually longer with smaller yolks.

But here’s the really interesting thing: When Bell examined herring in future conditions, raised in both warmer temperatures and more acidic waters at the same time, the herring didn’t look much different from the herring raised in today’s conditions. Bell says it was like the two factors cancelled each other out. The fact that they were raised in harsher conditions was invisible to the naked eye…and the scale.

But when you looked at them at the molecular level, at the RNA to DNA ratio, Bell says the eggs raised under future conditions were compromised.

“It hides the fact that they’re stressed because they almost cancel each other out, but they’re still affected,” she says. “You look at their molecular level, they’re still not in good condition. That’s kind of terrifying. Like, okay, well maybe in the future look at them and we go ‘Oh, they’re fine, they look fine!’ but actually if you look at their protein expression they’re not functioning as well as they used to.”

Bell says  she doesn’t know exactly why the two factors would cause this reaction, but the effects are hard to ignore.

“There’s something going on, they’re stressed out, and we need to be very careful about what we’re using to determine how stressed they are in order to say whether they’re going to be compromised in the future,” she says.

The Alaska Department of Fish and Game doesn’t take the RNA:DNA ratio into account when it’s monitoring Sitka’s herring population, although it does keep tabs on average weight and age classes. ADF&G biologist Sherri Dressel says the department takes climate change into account in its model by keeping tabs on temperature.

“If temperature changes for a block of years and that affects herring survival, we are able to estimate a survival during blocks of similar temperature,” says Dressel. “If there is long-term climate change, and the temperature continues to go up, this model allows us to estimate estimates, frankly of temperature over time.”

“With research like Lauren is doing- when we learn sort of the trigger points, or how ocean acidification affects certain life stages, then we may be able to incorporate it more effectively and more narrowly.”

Read or listen to more about Bell’s research on herring here.