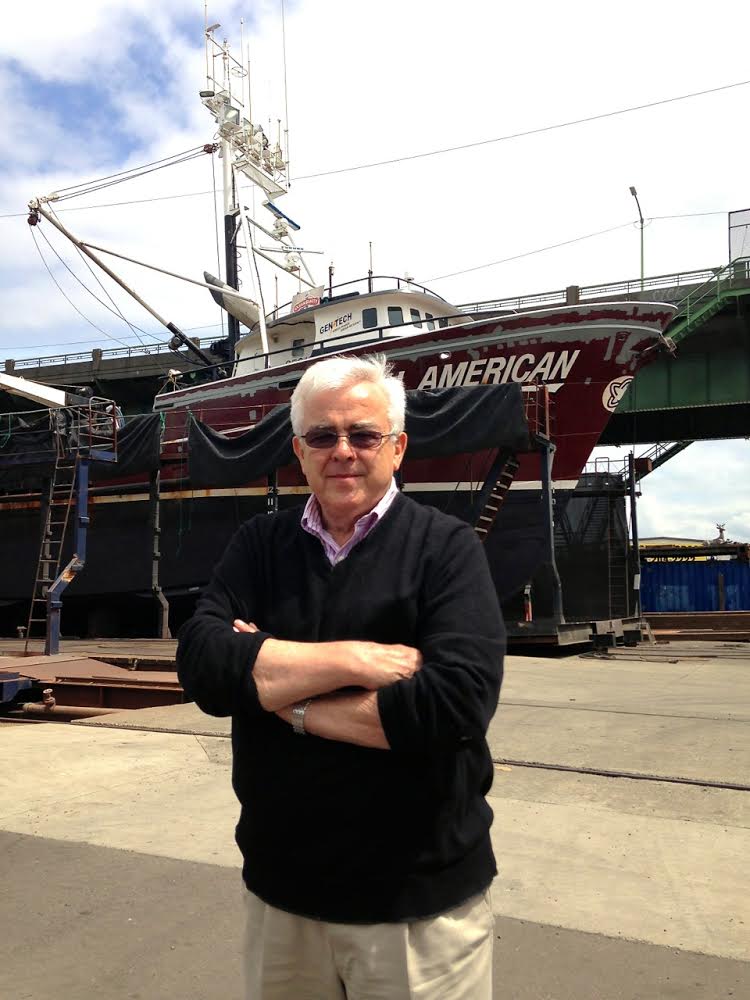 As voters consider a November 6 ballot measure to cut carbon pollution in Washington state, you might not expect fishermen and marine suppliers to defend an initiative that big oil—in a tsunami of misleading ads—claims will drive up fuel bills and achieve nothing.

Nice try, oil boys. Keep huffing. Initiative 1631 is our best shot to protect both our wallets and the waters that feed us all. We’re voting yes.

We depend on fisheries, so we need an ocean that keeps making fish. That requires deep cuts in carbon emissions. And yes, we burn a lot of fuel to harvest seafood and bring it to market—so we need affordable energy. Washington’s Initiative 1631 provides the tools to deliver both.

Carbon emissions are already damaging the seafood industry in Washington and beyond. This pollution heats our rivers and oceans and it acidifies seawater. These changes drive an epidemic of harvest closures, fish and shellfish die-offs, even dissolving plankton. Pollution is unraveling marine foodwebs that sustain both wild capture and aquaculture harvests—jeopardizing dinner for more than 3 billion people worldwide. Today Washington’s endangered resident orca whales are starving for lack of Chinook salmon. To us, that’s a sobering sign: No one catches fish better than an orca.

We are not amateurs or do-gooders. We are Washington residents who have built careers and businesses in fisheries. Several of us come from families that have worked the sea for generations. All of us have benefited from our region’s strict and sustainable harvest management regimes.

Our legacies and our livelihoods are being eroded by the ocean consequences of carbon emissions. Even the best-managed fisheries cannot long withstand this corrosion. Knowing this, we have done our homework. We opposed an ineffective and costly carbon tax proposed two years ago in Washington. We did not lightly endorse Initiative 1631. We pushed hard to improve it first.

We like the result. The initiative charges a fee on carbon pollution, then invests the money to “help people become the solution.” That is a proven recipe for cutting emissions and building a stronger, cleaner economy.

In the Nov. 6 election, Washington citizens have a chance to face down the oil lobby that has stifled progress on carbon emissions for many years. But we cannot watch silently as some of our neighbors fall under the $31 million blitz of fear-mongering ads that oil has unleashed to fight this measure. We know and respect people in the oil industry. But they are not playing straight this time.

Here we refute their misleading claims.

MYTH: Oil pays, but other polluters are unfairly exempted

REALITY: A fee on all heavy industries would kill jobs, exporting pollution instead of cutting it

If you want to cut pollution, it pays to aim. Targeting carbon prices where they work—not where they flop—is necessary to reduce pollution and build a stronger, cleaner economy. That’s what Initiative 1631 does.

For some key industries, a price on carbon emissions kills jobs without cutting pollution. That’s what happens to aircraft manufacturers, or concrete, steel and aluminum makers. They use lots of energy and face out-of-state competitors (I-1631 Sec. 8). Suppose we slap a carbon fee on them as the oil boys pretend to want. Sure enough, their competition promptly seizes their markets and their jobs, and factories flee the state. Way to go, oil boys! You left pollution untouched, and you crushed thousands of good Washington jobs!

By waiving the fee for vital but vulnerable industries, Initiative 1631 keeps jobs and manufacturing here in Washington. The initiative helps these companies reduce emissions over time, just as it does for the rest of us. In fact, it even reserves funds for retraining and assistance so fossil-fuel workers can transition to new careers. That could become necessary as the state migrates from dirty fuels to a cleaner, more efficient economy (Sec 4,(5)).

In a clean-energy future, Washington will still need local manufacturing and basic materials. Keeping these businesses here allows the rest of us to buy from local producers, instead of paying (and polluting) more to haul those goods back to Washington.

The oil boys also whine about Washington’s last coal plant, in Centralia. It is exempt from the fee because it is scheduled to close by 2025 under a legal agreement. Why shoot a dead man?

MYTH: This is an unfair tax on low-income families.

REALITY: The poor get help to cut fuel and energy bills.

Initiative 1631 provides both the mandate and the means to avoid raising energy costs for lower income people. Carbon revenues fund energy efficiency and more clean power—permanently reducing fuel consumption. The measure reserves 35% of all investments to benefit vulnerable, low-income communities (Sec 3, (5)(a)) —ensuring a fair share for those of modest means. It also funds direct bill assistance where needed to prevent unfair energy burdens on those who can least afford it (Sec 4, (4)(a)).

MYTH: The fee would burden businesses and households

Despite the scaremongering from oil companies, consumers and businesses are saving hundreds of millions of dollars in states that have policies like I-1631. How? Carbon revenues fund more clean energy and fuel-saving improvements (such as heat pumps, solar and wind power, and fuel efficiency retrofits). That’s what 1631 will provide in WA. These investments reduce fuel bills. Even the big oil companies use internal carbon pricing, as do hundreds of major corporations. Their internal prices drive energy efficiency and lower emissions in their own operations, cutting their costs; they also help position the firms to thrive in a carbon-constrained world. If this didn’t pay, big oil wouldn’t do it. Big oil producers like Exxon hate spending money on fuel they don’t need to burn. They just don’t want the rest of us to have the same tool.

Nine East Coast states are using carbon revenues to cut both their fuel bills and their emissions. Their Regional Greenhouse Gas Initiative (RGGI) helped them avoid spending $1.37 billion on imported fuel in the last 3 years alone.  If refineries do pass along Washington’s fee to consumers (as we expect), households and drivers here will still reap the same kind of benefits as ratepayers back East: efficiency and clean energy investments funded by the fee will reduce our energy bills. A heat pump alone can cut home heating costs by half to two thirds. The fee starts in 2020 at less than 5% of today’s gasoline prices, and rises to about 13% by 2030. Fuel efficiency investments help protect people who still need fuel-burning trucks and vehicles: you can’t haul timber or fish to market with a bus pass. For those who cannot switch to transit, electric vehicles, or low-carbon fuels, the initiative funds fuel efficiency improvements (Sec 4, (1)(d)(iii)). The resulting fuel savings can easily outpace the cost of the fee. One example: HyTech Power, in Redmond, sells a system that increases combustion efficiency in large diesel engines, saving at least 20%. This retrofit alone (one of many proven options) could save diesel users more than the future cost of the carbon fee projected by its opponents.

REALITY: Price-and-invest policies are clobbering pollution in other states.

Pete Knutson with the F/V Loki

Carbon price-and-invest policies are delivering strong results worldwide. Here in the US, a price-and-invest policy helped California cut emissions enough to surpass its 2020 goals back in 2016—four years early. The East Coast states in the RGGI price-and-invest system have reduced their emissions by 50% since 2009, far surpassing their goal. By cutting harmful pollution, the multi-state RGGI program avoided $5.7 billion worth of healthcare costs and associated productivity losses, saving hundreds of lives. From Maryland to Maine, the RGGI program generated 14,500 job-years of employment and net economic benefit of $1.4 billion during 2015-2017 alone. This program saved ratepayers more than $220 million (net) on energy bills over the last three years. The nine RGGI states achieve this by committing 70% of their carbon revenues—about the same as I-1631—to increase efficiency and clean energy. That’s a recipe for success.

REALITY: Accountability and oversight are robust.

Accountability is built into this initiative from the ground up, starting with the revenue mechanism: It is a fee not a tax, so the money can’t be diverted. By law, fee revenues must be spent addressing the problem the fee is meant to tackle—in this case reducing carbon pollution and its many costly consequences in Washington. That means no pet projects, and no sweeping money into the general fund.

All investments must earn approval from a 15-member public board that includes experts in relevant technology and science, along with business, health, and community and tribal leaders (Sec. 11). The legislature and board will periodically audit the process to ensure effectiveness (sec. 12).

The oversight panel is deliberately designed to hold state agencies accountable. Washington treaty Indian tribes—who both distrust and respect the agencies— insisted that public members must hold more votes than bureaucrats, who get only four voting seats (Sec. 11 (5)). That power balance restrains the agencies’ ability to grab funds, yet it ensures the panel can tap their genuine expertise. To lead the oversight board, a strong chairman has an independent staff within the governor’s office. This provides the spine and staff power needed to ride herd on agencies and lead a crosscutting mission to combat climate change—a task that spans authorities and talents found throughout the state government.

A word about wasting money: If the oil boys honestly believed 1631 would waste our money, they wouldn’t fear it. They condemn the fee, but we know the price doesn’t worry them, since they use carbon prices themselves. They have poured more than $31 million into fighting 1631—the most expensive initiative campaign in Washington history—for one simple reason: The money will help the rest of us buy less fuel. Pity the oil boys. By passing this initiative, voters can cut their allowance.